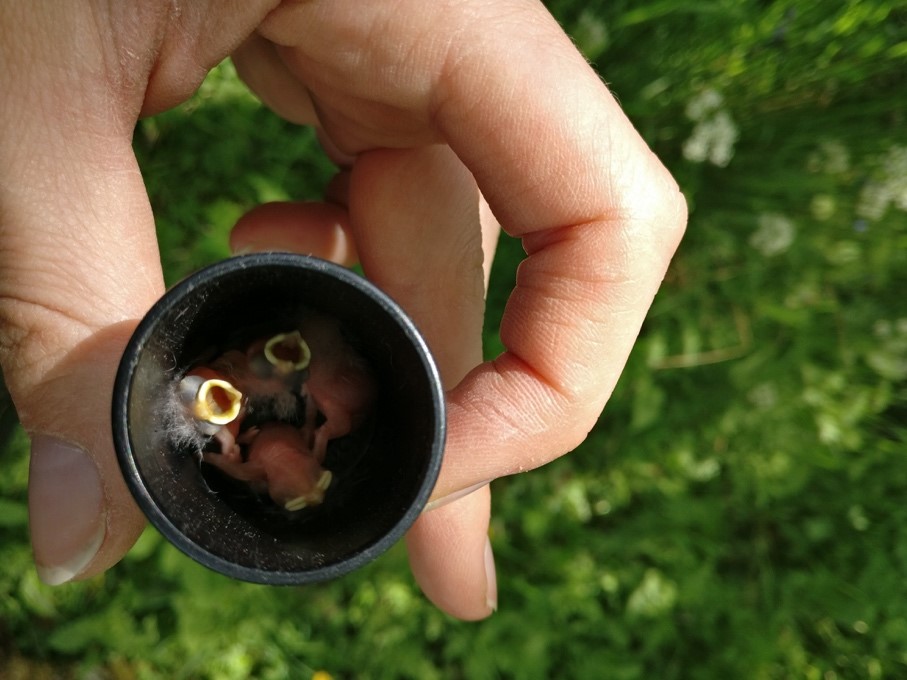 The modern-day Snow White would be an ecologist

In 2017-18, as soon as Iâ€™d wrapped up my undergrad exams, I started working as a research assistant with Edinburgh Universityâ€™s Phenoweb team, studying phenological mismatch in blue tits. I would drive up and down the A9, from Edinburgh to Tain, and spend my days wandering the Scottish Highlands catching birds and counting caterpillars at our 44 field sites.

I meandered through rolling fields and along rivers, serenaded by the echoing calls of songbirds and pheasants. Rabbits and hares jumped out of my path, great stags cautiously sneaked up behind me, and owls flew from their perches as I raised them from their slumber. I saw my first red squirrel, and my first golden eagle. But the best part of the work was the blue tits.

Blue tits are wonderful birds. The adults act as if they are ten times as big as they are, hissing and dive-bombing if you come too close to their offspring. Theyâ€™re intelligent, remembering where my colleagues and I had hidden on previous attempts to catch them. To stay stealthy, weâ€™d crouch down behind trees, rocks, and bushes, sometimes outfitted in sniper-like ghillie suits (though, they did more to hinder than to help). When the parents went in the nest-box to feed the chicks, it was go time. We sprinted at the nest-boxes to try and catch them; but, more often than not, they escaped before we got close. Weâ€™d spend hours measuring chicks and adults, and collecting their droppings. Ecology is messy work. We stank up the rental vans and the local hotel pub, leeching off their Wi-Fi to upload the hundreds of data-points we collected during the day.

My time with Phenoweb fanned the embers of my research interest into a full-blown fire. I realised I loved the long hours of fieldwork, the 10,000-steps-before-lunchtime distances, and traipsing from nest-box to nest-box before driving to the next site. I even loved the dozens of small injuries: the car doors slammed into my knees, stinging nettles clamped between my legs, having ticks cover my skin and clothes, ankles twisted, and, on one occasion, there were even piglet bites. But the moment that really sealed the dealâ€”one that made me realise I wanted nothing more than to spend the rest of my life researching animalsâ€” is one I will never forget.

I had reached into a nest-box, like always, to check whether the eggs had hatched. The nest-box was too high up for me to see inside, so I gently groped around and felt the soft flesh of the newly hatched chicks. Excited, I pulled out my scale, and a small plastic photo-film container which we placed chicks into so they didnâ€™t fall all over the place (as in photo above). Setting up my â€˜workstationâ€™ on a flat bit of ground, I proceeded to gently lift the squirming chicks out of the nest, cupping them softly in my hand. But one wasnâ€™t fully hatched, and its little bald head was poking out through the broken eggshell. The egg rolled around in my hand as more and more of the chick emerged. I felt it struggle against the shell encasing it, until it had fully extracted itself, joining its siblings in their squirming throng.

The emotions I felt as that little bird struggled into being, cradled in the palm of my hand, can hardly be described. It was a mix of wonder, pride, love, and astonishment. I donâ€™t cry easily, but at this, I almost did. I shared the first moment of that chickâ€™s existence in the world.