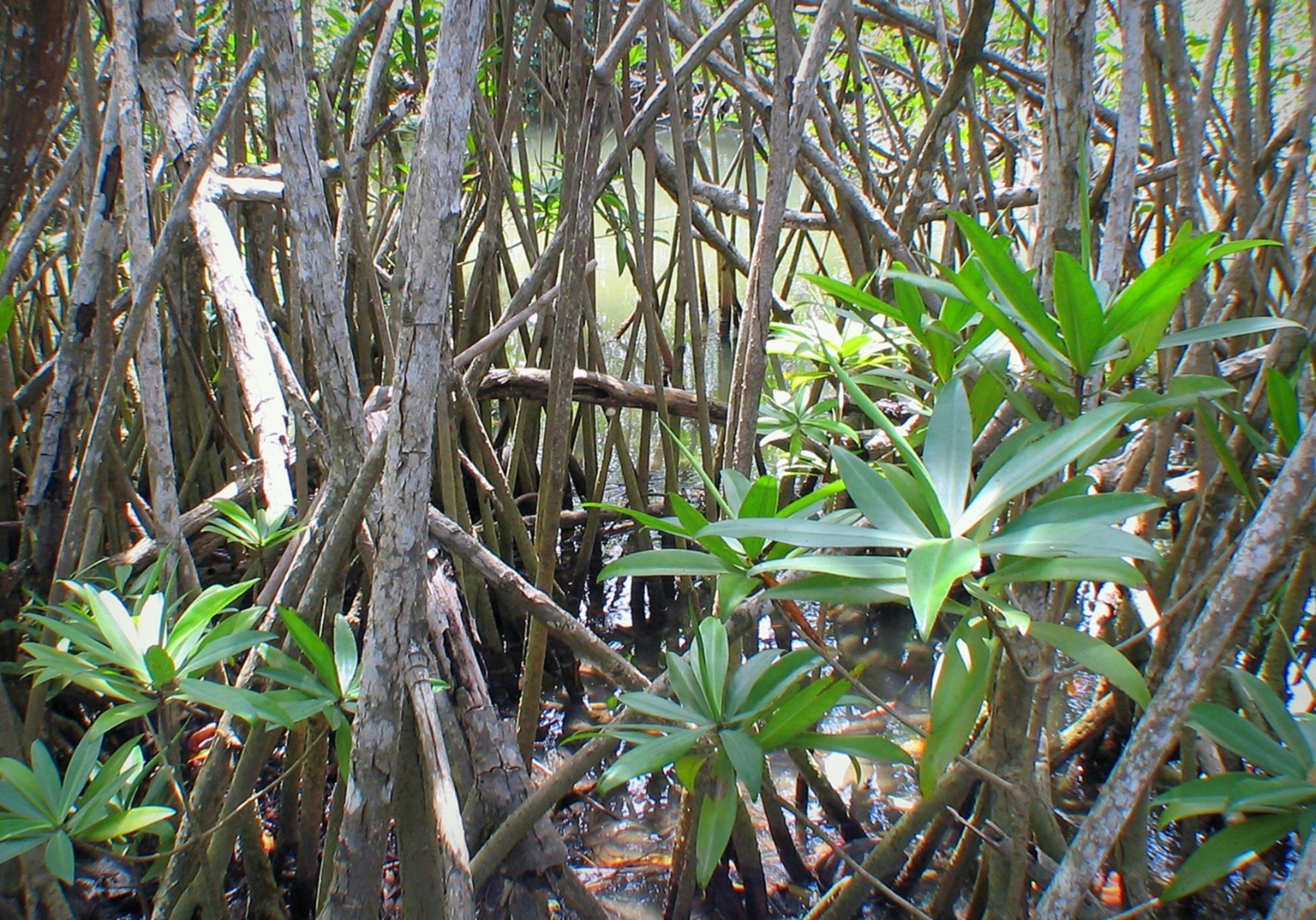 Stuck Between Land and Sea

My fieldwork days as a scientist started at the rim of volcanoes; from there, my career path slowly meandered towards the water. It took me down slopes, passed through caves, watersheds, urban areas, agricultural lands, and coastlines. But before reaching the ocean, I got stuck â€“ quite literally â€“ at the interface between the land and sea.

Back in 2008, I joined fieldwork efforts to characterize the mangrove forest structure and diversity in the north Pacific coast of Costa Rica. One beautiful sunny morning, after checking our gear and confirming that the tide was receding, we entered the Iguanita mangrove forest. For five hours we worked our way through the tangle of roots, going deeper and deeper into the forest. So far, everything was going according to plan. Our team leader made the call â€” “we have finished!”â€” and the plan was to backtrack our way to the entrance.

But, at that point, we were quite far from the entry point, it was hot, the chaotic root system was cruel, the mosquitoes were unrelenting, and our water supply was running low. We heard breaking waves in the distance, so we knew the beach was nearby. A new, seemingly better, plan was hatched; we would head towards the beach and walk back along the sea.

But as we moved towards the beach, the root system got crumblier, as if rotten. With every snap, someone would go down straight to the mud, to the surprise of the crabs below. I acquainted a sturdy walking stick, and named it ‘Pablo’; it became my loyal companion through the treacherous terrain. About an hour later, we got to a narrow open area â€“ probably a crusted drainage ditch. Beyond it was another strip of thick mangrove trees, and beyond that we could almost see the beach. So close! The next step was easy: cross the ditch.

Two of us went forth first, and within the blink of an eye ended up waist-deep in the mud. What just happened? My first thought was of an old Robot Chicken cartoon where a giraffe sinks in quicksand and goes through the “five stages of grief”. Would that be me? What to do? We were utterly stuck and likely sinking. Then, I thought of the tide slowly rising above my head. And then, crocodiles. What is it with the mind playing tricks on us? As a child, I had nightmares with crocodiles, even if we donâ€™t have them in Puerto Rico, where I’m originally from. But what got me worried wasnâ€™t my irrational fear, but the look of the two locals scanning the area, seemingly worried. I didnâ€™t ask why, I just knew we needed to get out of there.

At that point, I realized I had ‘Pablo’ the walking stick with me. Finally, my thoughts got useful: I just needed to follow the “Man vs. Wild” instructions. That is, to lay Pablo across the surface and use it to push myself up. It was working! I kept using ‘Pablo’ until I reached the roots at the other side of the ditch and dragged myself out. I passed ‘Pablo’ around, and everybody got out – distinctively ungracefully. The only casualties were several boots that stayed in the mud and were lost forever.

At last, we reached the beach, and we went straight for a swim. The plume of mud coming out from our clothes reached the surfers floating in the distance. All refreshed, relieved, and feeling silly, we got to answer questions from the curious people around. We briefly explained that we were studying the mangroves and why. They looked interested, and added, “Pura Vida, just be careful, there are crocs around”!

Luckily, I got to continue my career path across the land-sea interface into coral reefs ecosystems. Coral reefs have proved to be another quite adventurous fieldwork realm, and my true passion. All of this, thanks to trusty ‘Pablo’, my first #fieldmascot.