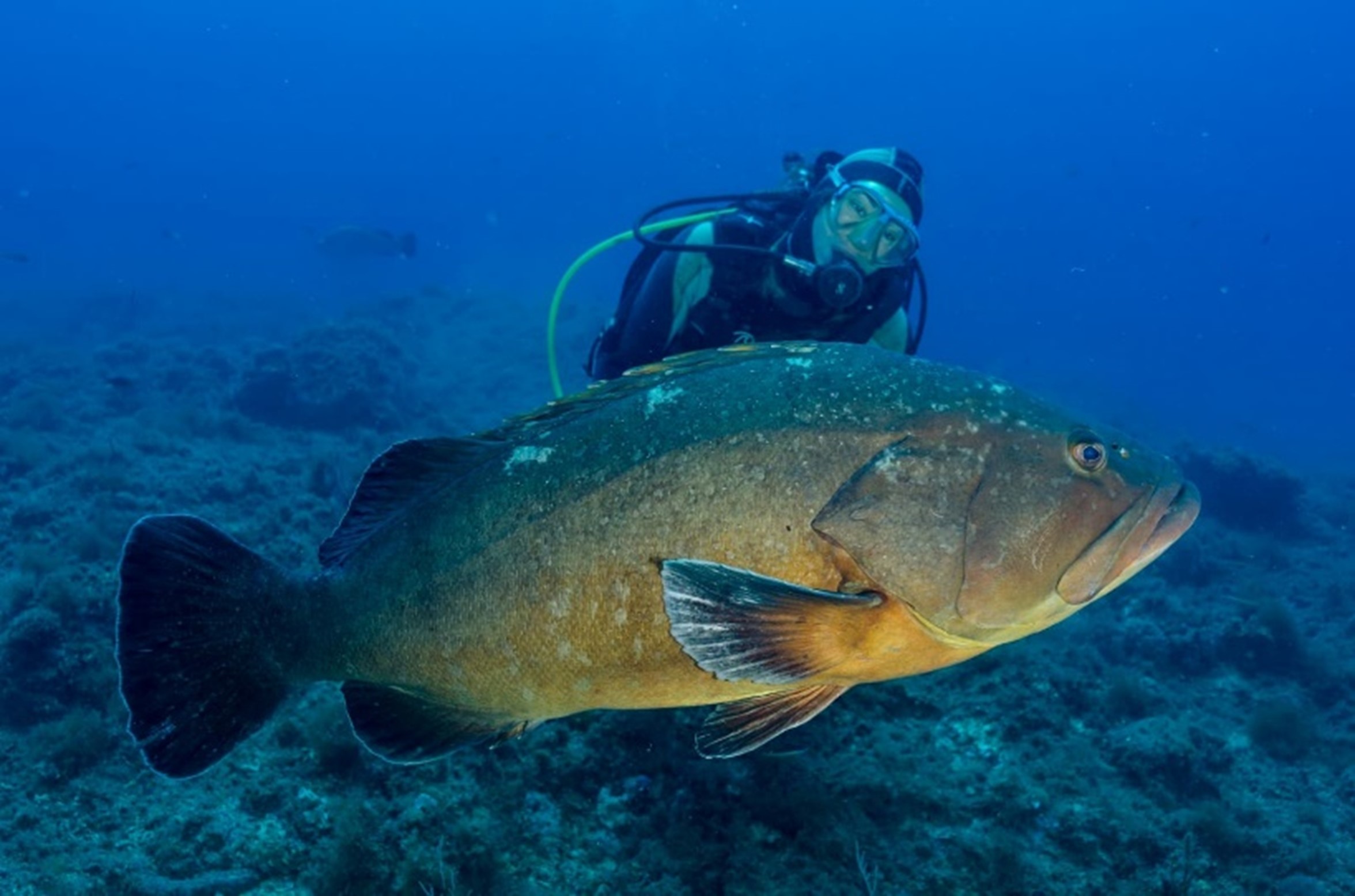 Me, a delicatessen for groupers?

To divers, the Medes islands of the Spanish Mediterranean are a veritable paradise. Located in the upper-right corner of the Iberian Peninsula, this group of seven islets are teeming with life, which attracts thousands of marine adventurers per year. The Medes are where I did most of my PhD fieldwork, and where I had some of the most magical (and strange) moments I have experienced as a marine ecologist.

Because the Medes are a designated Marine Protected Area, the marine fauna remains abundant and large. So, while my work focuses on benthic species that are found amongst the beautiful Mediterranean coralligenous reefs, which are coral-dominated reefs formed by the accumulation of calcareous algae, I got used to working surrounded by large friendly groupers.

Friendly, that is, most of the time.

One day, my lab mate Ignasi and I were heading down to a coralligenous wall at a dive site called La Vaca (The Cow). Our mission: find the 30 gorgonian colonies that we had tagged the previous year and collect new samples. Ignasi was carrying the scissors and had to find the colonies. I had to put each sample into the sampling bags that I was carrying. Relaxing dive, I thought.

When we spotted the wall, I pulled out the sampling bags from my carrier bag. To my surprise, five massive groupers came straight to me. I gave them a friendly greeting, much as a human can greet a fish; however, I soon realized they weren’t just coming to say “Hi”. They were coming for me!

The groupers started biting the bags around my hands like no tomorrow. I felt like I was fighting for a toy with some big dogs. Maybe they were just trying to tell me that I wasn’t welcome there?

I remembered titan triggerfish attacking divers in Mabul island (Malaysia) to protect their brood and thought that maybe the groupers were just doing the same. My immediate reaction was to kick off horizontally into the blue to have some distance from the wall.

However, the groupers continued to chase me and kept trying to swallow all the bags around my hands in a vicious feeding frenzy. The water was speckled with bits and pieces of my sampling bags. That’s it, I thought, the sampling is over.

Fortunately, Ignasi, who seemed to be less tasty for the groupers and managed to avoid the frenzy, was more level headed and signed for me to hide the bags. In my initial confusion, I had pushed my hands with the bags away from my body to protect the diving gear (and my vital organs). But Ignasi had realized that the groupers were just interested in the bags, so maybe hiding them against the chest would do the trick.

And it worked! The bags were likely just the same size, colour, and shape as the fish they normally eat. Or maybe someone used to illegally feed the groupers from bags that looked like ours. In any case, the groupers stopped attacking me as soon as the bags were out of sight. We could even get back to the wall and finish sampling.

“I thought the sampling was over,” I confessed to Ignasi when we were back on the boat.

“At first, I thought that too,” he replied, “but then I thought how quickly we would have been sent back to the water if we had told our supervisor Cristina that we couldnÂ´t finish the sampling because of the groupers”.
I laughed, he was right.

Daniel GÃ³mez-Gras
Daniel recently completed his PhD on the response of the coralligenous assemblages to climate change at the Med Recover Lab and Institut de CiÃ¨ncies del Mar.