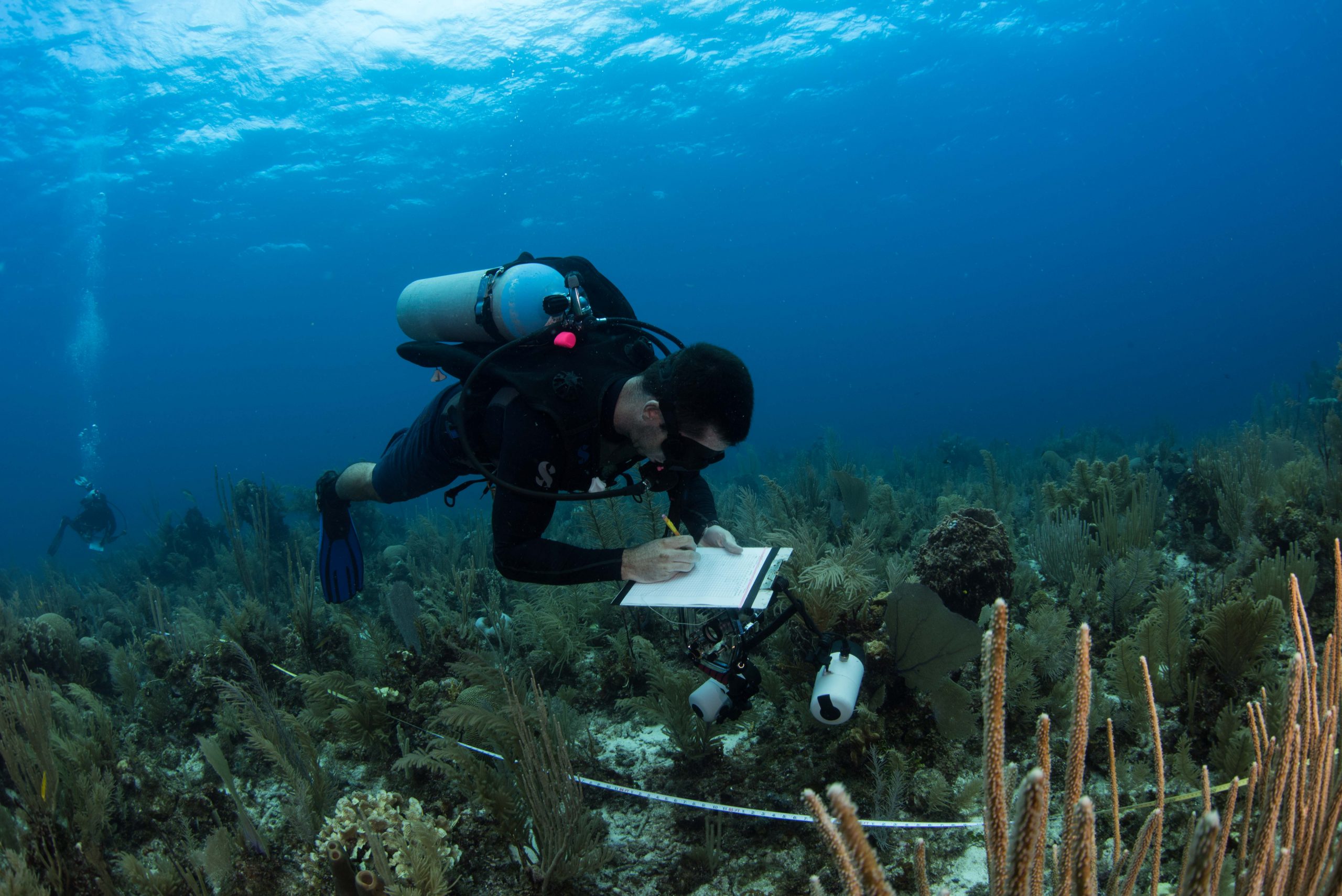 The life of a transect tape

Laying out a transect line over the reef becomes one of those things you no longer realise you are doing â€“ you hit the bottom, tie it off and start swimming. But when you turn to start the survey, your brain switches on again, and on coral reefs, can overload while trying to jot down the names of everything swimming in the vicinity of the line. Trying to recount the amazing marine life seen along reef transects can be hard to do justice. So many good memories. Instead of the usual tales of mantas, whales and endangered red handfish, this time Iâ€™ve stopped to consider the life of the transect line itself. This 50-m long piece of flattened fibreglass goes through more than most people crunching the numbers at the other end would imagine.

To start with, it apparently looks tasty. Sea urchins are notorious transect line-munchers. They hone in on the line during the survey, and start longitudinal tears, stripping pieces off the edges. Reeling the line in at the end of the survey can sometimes require tugging it out of the jaws of numerous urchins, using all their tube feet to hang on to the reef surface without letting go of the line. Parrotfishes are less secretive about their intentions, swimming along the line inspecting it before deciding on a place to have a taste. They take very clean bites out of it, with cookie cutter precision. Herbivores tend to do the most frequent damage, but large triggerfishes probably give the best bang for the bite, adopting more of a smash-and-grab approach. Seeing what they can do to a pretty hardy piece of fibreglass provides plenty of motivation to steer clear of the big ones!

Transect line attack by marine life has never prematurely ended a survey though, that I know of. Anthropogenic disturbance is more serious, and has resulted in abandoned surveys, wasted effort, air and time. Regardless of how isolated a site may seem, other dive groups can sometimes show up. A few times Iâ€™ve been swimming along the line to meet a stranger coming back towards me reeling in my line. Who knows if they thought they were cleaning up some rubbish or thought they could use the line for something themselves. But once a situation like this escalated into what was almost my only underwater fight. Surveying a deeper, high current site with only just enough air to safely do the survey and finish the dive promptly, I met a dive guide followed by group of less-than-expert divers. We were on a coral reef, and he had been stripping up my transect line off the reef and had made a huge tangle out of it. He was waving his arms around at me and pointing at the reef, presumably indicating that he thought the line had been damaging the reef, while beneath him the big tangle he had generated in the line was tearing a bit of soft coral as he was aggressively tugging the line up, and behind him his dive group were crashing around the reef like bulls in a china shop. Regardless of his good intentions, the mess he made took me a very long time to sort out on the bottom, fighting the current and watching my air running down. No data could be collected from that site, which was very hard to get to and became a wasted opportunity.

So next time you are using reef survey data, instead of only thinking about the diverse array of fishes and invertebrates represented by the numbers, spare a thought for the charismatic macro-equipment that we all rely on!

Rick Stuart-Smith
Rick is a marine researcher with the University of Tasmania Institute for Marine & Antarctic Studies and co-founder of Reef Life Survey.